When it comes to grand plans and even grander undoings, Edithton Beach was Edith Rockefeller McCormick's Waterloo. Villa Turicum by default suffered as well due to the circumstances.

In a previous post, I mentioned the inimitable Edwin Krenn (of Krenn & Dato) and one of his projects. In 1923, Edith (never modest about her aspirations) embarked on a plan with her European partners to create a resort/colony for the wealthy. A national contest was held to select a permanent name her community. The ideas poured in because there was to be a prize of $1,500 for the selected name. The submissions included such names as "Eden Pier" and "Ediths-dream", but Elmer Huge in La Porte Indiana won the prize for his concept: "Edithton Beach"

This venture was part of the Rockefeller McCormick Trust; the backbone of Krenn & Dato that realized many of her real estate dreams.

This time about 1,500 acres were involved, with Edwin Krenn at the design helm. This was to be a community of millionaires; complete with a golf course, luxury marina, exclusive schools with playgrounds and of course the Tudor style homes themselves. It was to be located on the Illinois Wisconsin border, bisected by a rail line and fronting Lake Michigan. (Years ago when I first read about this I raised an eyebrow, but more about that later.)

Work on Edithton began post haste, and in designing the community Krenn ransacked the styles of such places as Palm Beach and Atlantic City. It is here that I would like to cite a cheeky article that recently was brought to my attention; written by Diane Giles of the Kenosha News, who claims that if it weren't for the Great Depression, Pleasant Prairie would have (horrors!) a community of millionaires at it's doorstep:

With her divorce settlement and some of Daddy’s money (at one point he had given her $40 million) she began buying up property in Pleasant Prairie. When she was finished, she and her investors owned a large tract between today’s Southport Park and the state line — about 3.5 miles of lakeshore.

Edithton Beach extended to Sheridan Road in places and farther west, past the 2200 block of 104th Street.
One source stated that a big arch was erected over Sheridan Road at the point where a side road led to the east into the heart of the new development: The arch was built to advertise the project.
The plans were indeed grandiose. Edithton Beach was to have a swank downtown area with buildings half-timbered in the old English Tudor style.
Edith spent big bucks — more than $4 million — on the groundwork of her fashionable city, building a harbor for the yachts that were sure to sail in and an 18-hole golf course with a lakefront clubhouse. The infrastructure for streets was begun.

Here is a photo of the Pleasant Prairie -Edithton Beach area taken in 1946, courtesy of historicaerials.com: 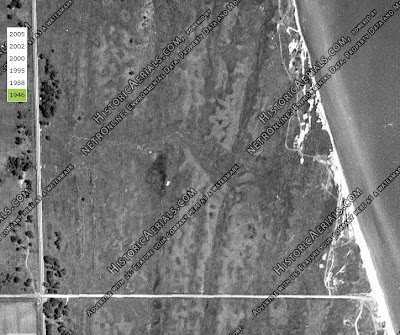 The road that you see horizontally across the bottom is current-day 116th Street, which is the North Border to the Chiwaukee Prairie Nature Preserve. Bear in mind, I said 1946. This is the earliest period that we can view from the air what was to constitute a large portion of Edithton Beach proper.

In the 1920's the work commenced, but unfortunately Edith was unable to supervise any of the construction herself, nor even visit the Krenn & Dato offices due to her agoraphobia. As the year 1927 came and went, Krenn & Dato continued to borrow heavily, wading deeper and deeper into debt. This of course sent the Rockefeller McCormick Trust, it's holdings, Edith, and Edwin Krenn & Edward Dato lurching toward the unavoidable disaster which would occur in 1929. After the crash Edith was left with a huge portfolio of unsold real estate, tenants who could not pay, and enormous debts.

At this point our map brings us up to date, because in 1946 a fellow named Joseph Shaffron purchased much of the beleaguered property (in 1936 what constitutes a lot of Pleasant Prairie was sold for back taxes) and renamed the Edithton Beach portion, with it's unfinished roads leading to nowhere, after his daughter. We can now locate it via it's current name, Carol Beach: 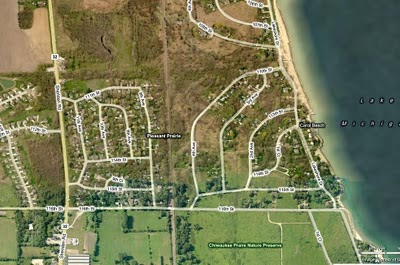 As we can see in comparing the previous photo to the above, not much has happened in the 79 years since Edith's death in August of 1932. What did happen is that in 1946 Mr. Shaffron announced that under the new name of Carol Beach Estates the property would be developed in sections. The project was expected to take (once again) several years to complete. 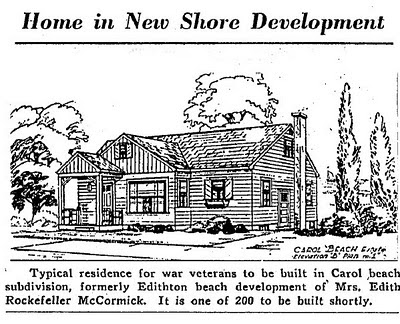 An advertisement that appeared in the Chicago Tribune in September of 1946
Once the first phase of Carol Beach was completed, more expensive homes were planned on the Eastern (more desirable) sections of property. Still, not much of anything happened. This begs one to wonder what would have happened if the Great Depression hadn't occurred, or if Edith had lived and her father John D. Rockefeller would have chosen to bail the project out in some fashion.
My guess is; you could have built it, but the millionaires would not have flocked. The area is certainly lovely - that is evidenced today by the Chiwaukee Preserve. It is perhaps there that we find a silver lining to this entire little drama. If the project had indeed progressed as planned, it is almost certain that the vast portions of what turned out to be undeveloped land would never have been available for preservation.
Posted by Todd at 6:29 AM

I had communicated with you awhile back mentioning my YouTube videos on "Winfield Hall", the FW Woolworth mansion and how YOU should put together a similar presentation on Villa Turicum. You thought it was a good idea. Have you made any progress? BTW I'm also the person that told you about HistoricAerials.com. Isn't that a great site!


I've since added "Rose Terrace" the Anna Dodge estate outside of Detroit designed by Horace Trumbauer of Whitemarsh Hall fame. Check it out, there are four total.


Winfield Hall was recently used as the mansion location for the remake of Mildred Pierce the Joan Crawford movie from 1945.

I own the last standing home from the beginning of the project. Was built in 1928. Would love to chat about it sometime with you