The Mystery of Edwin D. Krenn

Last night I started thinking about Edith's inamorato Edwin Krenn, and this morning I decided it would be fun to write a bit about him.

Edwin Krenn at the funeral of Edith Rockefeller McCormick, August 27th, 1932.
Bear in mind, Edwin is indeed a bit of a mystery. Little has been written of him because he was simply an ordinary man who moved to the United States in 1921, the reasons for which at the time were unknown. But this ordinary man arrived in the company of an extraordinary woman; Edith Rockefeller McCormick. That fact alone warrants a little digging.

When Edith returned from her extended stay in Switzerland (and her studies with Carl Jung) she brought with her another Jung devotee in the dapper form of Edwin Krenn. This started the tongues of the American press wagging immediately. He claimed to be an architect by profession; however I think the term of the day, boulevardier might be more appropriate. Today I think that Edwin would be what is now termed (and a favorite Palm Beach phrase of mine) a "walker".

Edwin arrived on September 27, 1921 aboard the S.S. George Washington which had departed Cherbourg on the 19th. The manifest provides us with the basics of the man; he was Austrian in nationality, an architect, spoke German, English, French & Italian and had recently been residing in Zurich, Switzerland. His destination was Chicago, and his age was thirty years and four months. Unknown (or probably known for that matter) to the crew and agents was that he was accompanying one of the wealthiest women on earth.

The situation upon the return of Edith and the arrival of Edwin was not helped by the fact that Edith soon divorced Harold. Edwin became her constant companion, and they would be seen about town together quite often. Edith loved to go to the movies, and in later years she always had Edwin in tow when she visited her favorite; the little Village Theatre on Clark St. via chauffeur driven limousine for a 10 cent show. (I myself remember the Village for being the only theatre I could find playing the movie Scandal in 1989; which featured a then unknown Bridget Fonda. It was in my neighborhood, so I walked as opposed to being driven.) Sadly, the Village is gone now too. 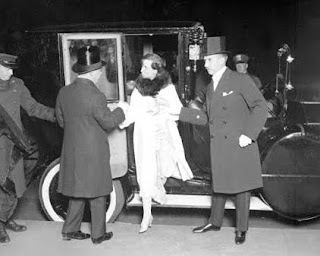 Edwin D. Krenn immediately was set up in real estate with a partner; Edward A. Dato, by Edith (or more accurately the Edith Rockefeller McCormick Trust) and the firm of Krenn & Dato was born. These gentlemen, and the real estate ventures associated with both would ultimately become Edith's financial undoing. Of course this all came to light after her death in 1932; for when she died she left only portions of her estate to her children: In her will she left Muriel four-twelfths, Mathilde two-twelfths, and Fowler only one-twelfth. The remainder she left to our Edwin Krenn, but this would be disputed later.

There is still a building of note in Chicago that was the creation of Edith's trust and the Krenn & Dato enterprise. It stands today as 3300 North Lake Shore Drive. Back then it was know as the Sheridan-Aldine Apartments: 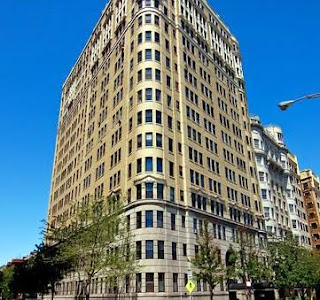 The Sheridan-Aldine Apartments was/is a 17-story Italian Renaissance-inspired structure that was erected after the land was purchased in 1925. Edwin Krenn headed the trust’s property development section, and also performed occasional design work. Krenn & Dato, another arm of the trust, provided the $1.2 million mortgage and handled rentals and sales. Like many other development operations, this all collapsed in the 1930s. The building's website has a nice little section devoted to this history.

Edwin Krenn had his most publicity after Edith's death. As mentioned above, he stood to inherit the majority of her estate. This alone would put him under a shade of limelight that, as Audry Hepburn once said, "...can ruin a girl's complexion." In one of Edith's obituaries it is written, "Upon him she had depended entirely in her fading years. She forced him upon Chicago society, planned with him a $45,000,000 empire of realty. Last year she had to sell $18,000,000 in securities to protect her small householders. The faithful Krenn threw in his all—$1,260,000. Her brother John was said to have guaranteed her $1,000 a day for life, but neither he nor his father could swallow Krenn." And so it goes. The man didn't stand a chance against John D. Rockefeller.

At this point one half of the Krenn & Dato team chose to speak up; none other than Edward Dato himself. He clacked to the press: "Krenn and I went to school together in Zurich. His family liked him to associate with me. . . . Then I came to this country. I worked for the International Harvester Co. as a consulting engineer. One day in the papers I read of Mrs. McCormick's divorce. The papers mentioned Krenn. I think: That is my schoolmate. I will look him up. . . . Mrs. McCormick wanted to put her money into civic projects which would be great things for the community. Of course it was against my wishes that I was drawn into it. We formed a trust, the three of us. Mrs. McCormick and Krenn said to me: 'Here is $5,000,000 to start with.' Krenn carried on the social end of it. I carried on the practical end."

And practical he was. Edwin I mean. Shortly before Edith's death Edwin Krenn sold his twelfths share of Edith's estate and his interest in Krenn & Dato to Edward Dato with the assurance of $2,000 a month for life. This was allegedly for the "good of the firm" Dato continued clacking to the press, and here I must quote again: "That is a delicate matter. Krenn was not friendly with the Rockefeller or the McCormick families. It was for the good of the firm. I will attend to the business. I am a fighter. I like to be in the thick of things. I like to take a chance. I like to make decisions. Maybe I am like Mussolini. . ."

Edwin D. Krenn & Edward Dato were to have their day in court with Edith's family and lose. Krenn & Dato (the firm) would go the way of Mussolini's head. Our Edwin would die many years later, (the recipient of a very nice settlement from the Rockefellers and McCormicks) on October 19th, 1965. As the mystery unfolds I will continue to update here.