Edwin Dismas Krenn that is. I neglected to mention in my last post that he never left the United States after arriving with Edith in 1921. He also joined the citizenry; below is the record of his naturalization on 10 February, 1927: 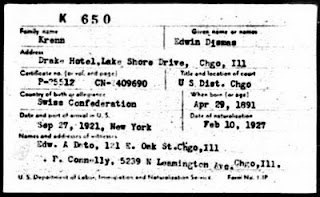 It is here as well that I would like to include an excerpt from an article written about Edith just three weeks before her death in 1932. Our Edwin is featured prominently, and it is also insightful with regard to his connection to Edith's affairs at the time:

"To say that Mrs. McCormick is broke is absurd," protested a plumpish, rosy-cheeked' little man who is seen with Mrs. McCormick almost every day. "When one is broke one cannot meet one's obligations. Mrs. McCormick can meet hers."It was Mrs. McCormick's obligations which led her into her stringency. They began to arise in 1921 when she and the plumpish little man began doing business. He is Edwin D. Krenn, reputedly 37 years old, a Swiss architect. He and his future patroness met while they were studying at Dr. Jung's clinic of psychology in Zurich in 1913. He was with Mrs. McCormick when she returned to the U. S. in 1921. That year he formed the real estate firm of Krenn & Dato, in which Mrs. McCormick is thought to have invested $13,000,000. Although at one time it employed hundreds of salesmen, to whom Mrs. McCormick on occasion gave "pep talks," it has not been strikingly successful.In 1923 she formed a trust bearing her name to consolidate, operate and develop some of her real estate properties which as late as 1931 were valued at $12,000,000. They consisted chiefly of office buildings in the business district, subdivisions at Highland Park Highlands, Edithton (named for her) Beach and a section near Evanston. In 1929 the Trust needed new working capital, had to pay off bank loans. Mrs. McCormick endorsed an $11,000,000 bond issue which was further secured by $18,000,000 worth of securities, chiefly in Standard Oil of New Jersey. When 15,000 tenants found themselves unable to pay rent she was unwilling to evict them. The Trust's income and securities both began to fall. The securities were sold to pay the bond issue. Bank loans were called. Mrs. McCormick met her obligations but in doing so had to place a $220,000 mortgage on her Lake Forest home and a $557,500 mortgage on the mansion at No. 1000 Lake Shore Drive which was a wedding present from her father. Now, on sunny days, she sometimes leaves the Drake to cross the Drive and enter the garden of her closed home. She must often muse over the scenes behind the foreboding Romanesque walls of grey stone when she was Chicago's No. 1 Hostess, serving meals off gold plates, discussing her favorite subjects of art, astrology, numerology, "synthetic psychology." Mrs. McCormick is not left lonely in her adversity. Mr. Krenn is as constant a companion as ever although until Mrs. McCormick recovers her health they will not be seen as of old in the neighborhood cinema, where they sat always in the back row, or at the theatre, chatting in German. Mrs. McCormick's brother, John D. Jr., recently rushed to Chicago to advise her, the first time he had seen her since she returned to the U. S. in 1921 with Mr. Krenn. Although Brother John is not thought to have aided his sister to a great extent, the reconciliation is said to be such that soon she may pay a visit to the Rockefeller Patriarch at Pocantico Hills. Chicago imagines that when she does, Mr. Krenn will not accompany her. For much as the Rockefellers respect his untiring devotion, and his confidence that she "will again be the richest woman in Chicago," they have had small respect for the business advice he gave the Dowager at the Drake.