Last week I was having lunch with my friend Carol in Lake Forest and the topic of James Joyce came up. It jogged my memory with regard to Edith's patronage of him as he was working on Ulysses in Zurich during 1918.

James Joyce had relocated to Switzerland during World War I, and he was already familiar with Carl Jung as he had purchased The Significance of the Father in the Destiny of the Individual while living in Trieste, Italy. This is interesting because Joyce was always skeptical of psychological analysis, yet none-the-less it created a connection and in 1918 he became acquainted with Edith Rockefeller McCormick via the psychiatrist. 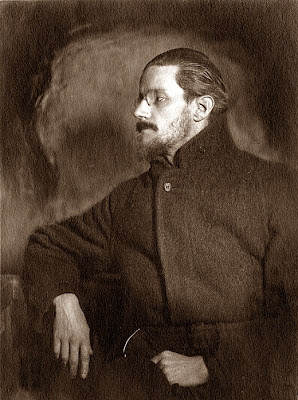 
Edith had left the United States in 1913 to become a patient of Jung in Zurich. Over the next eight years she would move from that role to protégée, finally becoming a lay analyst herself. Becoming immersed in Jung's artistic and humanistic techniques, she would underwrite much of the work herself. (She would found and endow the Psychological Club of Zurich.)

Due to her association with Jung (which provided entrée to many scholars and artists) Edith came in contact with James Joyce. She immediately set up a fund of 12,000 Swiss francs (1000 a month) to support Joyce, who had been working on Ulysses since 1914.

The arrangement lasted for about a year and a half, until Edith (ever the ardent supporter) pressed Joyce to undergo analysis with Jung. Despite the fact that the analysis would be offered at her expense, Joyce was vehement in his refusal to participate. It was at this point that his funding was coolly and quietly shut down. (Despite her withdrawal of support for Joyce, Edith's newly established McCormick Stiftung would continue to assist other needy artists, musicians and writers.) Joyce himself would later write after her death that she had been "prompted by humanity and generosity" (Letters, p. 324).

Edith would return to the United States in 1921, with the intention of turning Villa Turicum into a Mecca of psychoanalysis for devotees. Ulysses would be published in Paris in it's entirety in 1922, although it would take over a decade for it to make U.S. publication. It is interesting to note that in 1932 (the year that Edith died) James Joyce was willing to have his troubled daughter Lucia undergo analysis with Jung. The results were unsatisfactory, and by 1935 Joyce discontinued the sessions and terminated all contact with Jung.
Posted by Todd at 6:44 AM