I recently purchased a copy of Arthur Meeker Jr.'s Chicago, With Love; a book that offers a charming recollection of a vanished society, and Chicago's history from the vantage point of someone who grew up here during another era. My primary intention in re-reading the book was to brush up on the Meeker family's acquaintance with Edith Rockefeller McCormick, but I had forgotten that they too, owned a home designed by Charles Adams Platt. 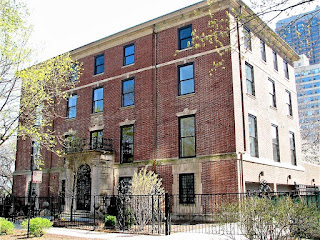 The Meeker family took up residence in their North Side (Lakeview) home around the time that Villa Turicum was being completed in Lake Forest. Platt's signature restraint is quite evident, and it is interesting to see his application put to use in a city residence versus a country estate. 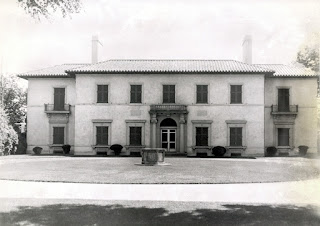 In 1913 the Meeker family's new address was 3030 N. Lake Shore Drive, and I am pleased to report that it remains there to this day. At the time, it's location on the North Side at Lake Shore Drive and Barry Ave. was quite remote.  Arthur Meeker recollects in his book that as a boy he would roller skate on the empty streets, and the family servants were often quite frightened by the solitary walk down Barry Avenue from their public transportation inland.

The twenty room mansion that Platt designed was a substantial 16,000 square feet. In 1945 it was acquired by the Helpers of the Holy Souls, who added a chapel and dormitory to the property over the subsequent years. In 2005 the sisters sold the property to a developer, and for a period there was concern that the house would be razed, as had many others in the neighborhood. Fortunately, only the dormitory and chapel were removed and a new developer acquired the property; converting it to four condominiums. 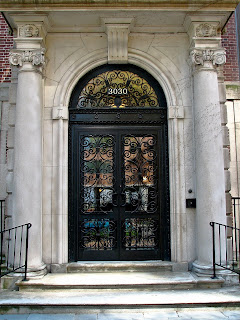 So many similarities, yet so many differences. Charles Platt  created two masterful residences; yet only one remains.  When I stood in front of the Meeker mansion recently, I tried absorb the sense of scale and the purity of design that Villa Turicum once had. For a brief moment I could imagine what it might be like to stand in front of that house; with  a central entrance that is almost identical to the Meeker's.
Posted by Todd at 8:11 AM

I would have thought Platt's Timberline, in Bryn Mawr, Pa., was the counterpoint to Villa Turricum.