In 1916, Chicago Tribune society columnist Madame X (who was actually socialite Caroline Kirkland) announced, "A Dream of the Future." This happened to be the dream of none other than Edith Rockefller McCormick. 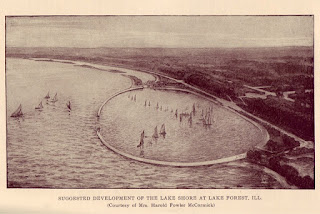 "Time may seem realized Mrs. Harold McCormick's vision of an archipelago of artificial islands following the coast from the Great Lakes Naval Training station to Chicago, forming a longitudinal lagoon which I would provide a safe and tranquil water course for suburban traffic. Instead of motoring to town we're taking the express trains Chicagowards, the millionaires of that part of the country could reach the Loop by water in swift in luxurious motorboats. The more adventurous could even make the trip in their velvet cushioned aeroplanes.

Can't you imagine the scene - The long line of beautiful islands, The inner waterway, with smart watercraft of all kinds skimming over it's glassy surface disturbing the reflections of the pagodas and gay gardens that would adorn the islands? Overhead the whir of man-made flying machines would add further life to the scene. We may not live to see it, but it is a picture capable of realization."

Harry Weese would propose basically the same idea for Chicago in 1952. The islands would be connected to the mainland through tunnels at the north and south ends and over a suspension bridge near Navy pier.

I can only imagine the row - both on the North Shore and in Chicago, by lakefront property owners if either of these ideas have come to fruition.