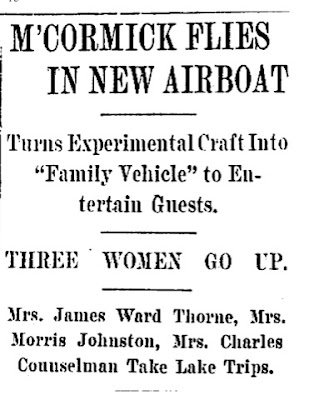 "The flying boat I budded out of its experimental and exhibition chrysalis yesterday and stepped into the "family convenience" class in Chicago. Harold F. McCormick informally entertained guests on the shore of his Lake Forest estate, Villa Turicum, with more than 20 flights in his new Curtiss air boat, Edith, and the four-passenger hydroaeroplane of Glenn Martin.

All of the guests, including three women, "went up" in the machines driven by the aviators, Glenn Curtiss, Glenn Martin, and Charlsie C. Witmer. At the conclusion of the flying boat party Martin and his mechanician, Charles L. Day, flew down the lake shore and landed in the public aero slip at Peck court, off Grant Park.

Mr. McCormick made three flights, one with each of the aviators. He tested out both machines and expressed completed satisfaction with his new vehicle.

Aviator Witmer will remain as an instructor with Mr. McCormick during the next two months. His mechanician, George Hallet, an expert from the Curtiss factory, who has demonstrated the machines on government tests in Europe, will remain in charge of the McCormick hangers and will be the aerial chauffeur of Edith.

Mrs. James Ward Thorne and  Mrs. Morris Johnston made a flight five miles out from the shore with Glenn Martin in his machine. Mrs. Charles Councilman went "aloft" in Edith, with Mr. Witmer driving. All of the members of the party were dressed in bathing suits. The women donned cork coats for the flights, which were called the first ever taken in air boats by women.

While the machines were in the air with the guests Mr. McCormick's motorboat raced over the lake, ready to direct its course in any direction assistance might be needed. During some of the flights Mr. McCormick stood at the wheel of the motorboat in his bathing suit. The air boats would come rushing through the water toward the motorboat. From the shore would seem that a collision was imminent, but at the proper moment the air boats would leave the surface of the water and gracefully sail through the air over the motorboat, while the occupants of each would exchange salutes.

Among others who skimmed out across the water in the air boats were Frank Farwell, Thorne Donnelly, James Ward Thorne, and Morris Johnston.

No time where the air boats other than under the perfect control of the aviators. Although there was little wind in the air in the lee of the high bluffs on the lake shore was puffy and full of "pockets," which caused the aviators to remain on the surface until well out in the lake when the machines would be launched into the air.

A large gallery of Lake Forest millionaires watched the flights from points of vantage along the shore." 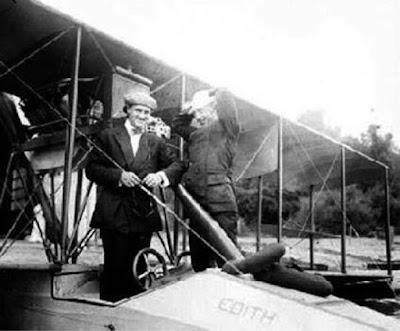 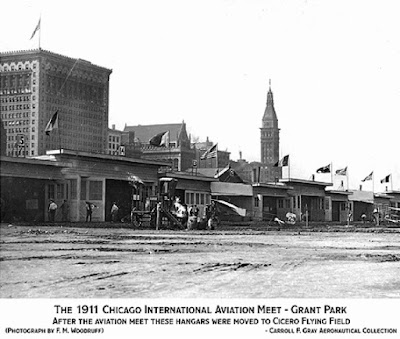 When the aerial age arrived in Chicago, Harold McCormick and Charles "Pop" Dickenson (owner of the Dickenson Seed Company) spent vast amounts of their personal fortunes supporting aviators and all things aeronautical in Chicago. 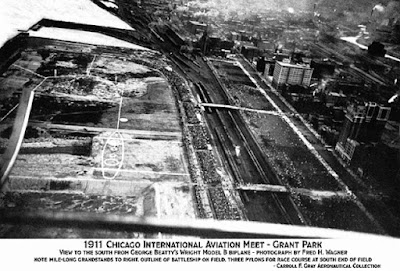 Oh what a day to have been on the lake in LF!

The closest we might ever get is a well produced and directed reenactment for one of many great scenes that would be in a remarkable film should it ever be made of these great American stories.

The cameras are easy today. There should be drones and great CGI throughout the project. With plenty of great on and off camera talent in Chicago alone, we just need the also rich Chicago fundraisers to get on board and to find the boat and air boats. Where are they now?